“No one better try to fondle Gaston this year!” Chad yelled as he stomped out of the bathroom and into the living room, still half-dressed from his shower.

Jensen made it to the weekend, but just barely. Finally, it was Saturday and he looked at the Post-It Rosey had attached to the bathroom mirror as he brushed his teeth.

Fic title: It's A Sort Of Fairytale With You
Author name:

kaelysta
Genre: RPS
Pairing: Jensen/Jared
Rating: M for language
Word count: 22073
Warnings: There's cussin' and crossdressin'
Summary: It’s a Disneyland AU where Sandy makes bad choices and so Jensen ends up filling in for her as Jane to Jared’s Tarzan. But Jensen is so good at what he does that Jared kind of falls for him a bit and draws Jensen in as well. They never meant for it to happen, but it sure did. 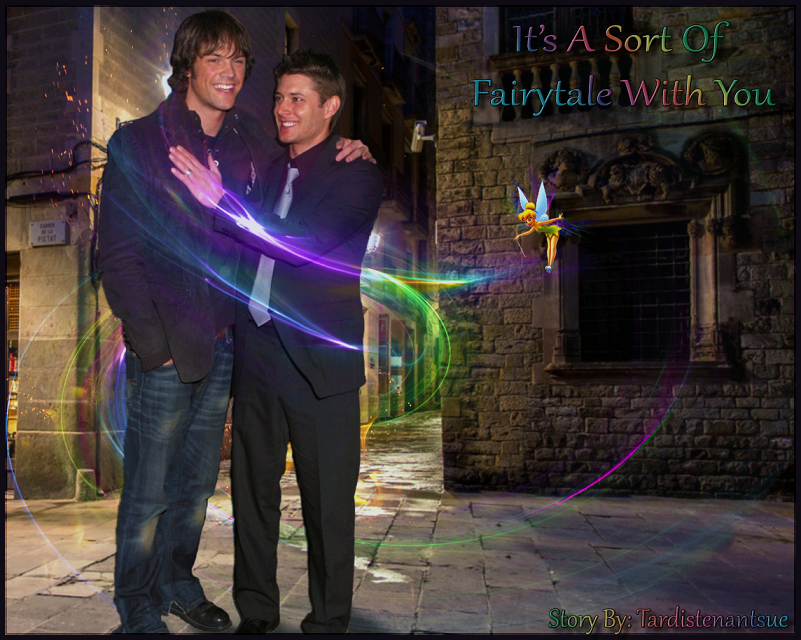 Author’s Notes: First, thanks to the mods here :

wendy for allowing me to join in again this year. Next, my beta

maddylionx3 who I more or less forced into it and she ended up reading it out load to me in various voices, including a wonderful Dr. Phil that had me in such stitches I had to leave the room for a while. And then there is

staticsintheair who was my artist two years ago and we kept in touch and talked about this fic for a while before it would come out of my brain. There is still a bit to write too so look for add-ons later on. This was written for her.

Last, but certainly not least by any means,

kaelysta who worked so hard on the art. I love it more than I think she understands! I hope she enjoyed reading the story as much as I enjoyed her art. And congrats to her on her wonderful news!

It was the end of the week and, somehow, Danneel had managed to talk Jensen into taking over for Sandy for the entire duration of Long Lost Friends Week, reasoning that if they were to switch up now the park higher-ups would know something was wrong and the whole charade would be for naught.

The next day, Jensen woke up with the worst ache in the arch of his foot. He flexed it a few times before giving up and just putting it flat on the floor. He couldn’t for the life of him figure out what he had done to cause himself that much pain.

Jensen thought he was clear of the park when he heard a voice behind him call his name. Or, rather, not his name, but ‘Mackenzie’. He tried to walk a little quicker, but he had been hasty when he was tying his laces and tripped a bit, allowing the person who had called for him to catch up and just grab on to his arm as he began to topple.

Once they were in queue to go out into the blistering summer that was Florida, Jared leaned casually into Jensen and dropped character. “You’re tall. I like that. Maybe we could get dinner together after we’re done here? We don’t have to leave the park.”
( Collapse )

Forty-five minutes later found the girls stepping back from their creation. Somehow, with their combined skills, they had managed to turn Jensen into the perfect Jane.

Twenty minutes later would find Jensen standing in front of the full-length mirror, marveling at the person he was staring at. She had some familiar features; ones Jensen saw when he looked at his sister, his mother, his aunts. But there were others there that were unmistakably Jensen, just softened. And then there were the bits that belonged to neither. Those were the handiwork of Danneel who had the assistance of something she had called ‘cutlets’ and one of her extra bras. The underwire was digging into him, but other than that, it wasn’t too bad. He had to admit, the whole package they had created wasn’t completely unconvincing as a woman, especially now that they had managed to make his hair look longer with the clip-in extensions Sophia had forgotten and left in her locker last month. Hell, the way he looked now, Jensen was forced to admit to himself – and if he was pressed, the others - he’d have tried to pick himself up at the bar.

Genevieve took her phone from her purse and scrolled thorough the numbers until she found the one she was looking for. Danneel frowned, trying to figure out just who the other woman was calling, knowing no one else had even been considered to play Jane that they knew. Finally, there was and answer on the other end of the phone and Genevieve smiling into the receiver.